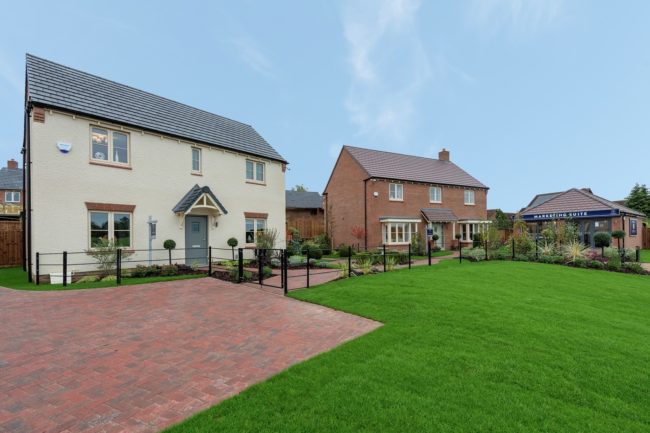 Midlands housebuilder Mulberry Homes has been confirmed as official sponsor of the fireworks display at this year’s Lutterworth Christmas Lights Switch On event, which is taking place between 6pm and 8pm on Friday 29th November.

Mulberry Homes, whose popular Kingsbury Park development of two, three and four-bedroom homes is conveniently located on Coventry Road in the town, will be helping to kick off the Lutterworth Town Council event in style.

Immediately following the big switch on at 7:30pm by the Town Council’s Mayor, Cllr. Tony Hirons, the annual fireworks display will get underway. Mulberry Homes’ Finance Director, Tony Flatters, will join the compères on stage prior to the first fireworks being set off.

The event – which welcomes approximately 1500 attendees each year – will feature on-stage entertainment throughout the evening, alongside a Christmas Market with mulled wine and a hog roast, as well as late night shopping. Lutterworth Town Band will accompany the festivities with traditional tunes, while a funfair and Santa’s Grotto will provide family-friendly seasonal entertainment.

Tony Flatters, Finance Director for Mulberry Homes, said: “We’re delighted to be taking part in this well-loved community event, which over the years has become a real highlight in the Lutterworth calendar.

“As the post-switch on fireworks display has itself grown to be something of a tradition for the Town Council and the people of Lutterworth, it’s an honour for us to be able to sponsor the display.”

Cllr. Tony Hirons, said: “Mulberry Homes are making a significant contribution to Lutterworth and its residents by their sponsorship of events. I would like to thank them for their generous sponsorship of our increasingly popular Christmas Lights fireworks display.”

To find out more about the event, go to https://www.lutterworth.org.uk/christmas-lights-switch-on.html/.

Homes at Kingsbury Park are available from just £229,950, with home moving schemes such as Assisted Move, Help to Buy and Part Exchange available alongside Mulberry’s bespoke Key Workers Scheme, which offers £500 for every £20,000 spent on one of its homes and is available to staff from the emergency services, schools, hospitals, doctors’ surgeries and the armed forces (T&Cs apply).

Anyone who would like to know more can register their interest by calling 0333 121 1030 to speak to a Sales Advisor, visiting mulberryhomes.co.uk/developments/kingsbury-park/overview/, or dropping into the sales suite on Coventry Road, LE17 4YX between 10am and 5pm daily (or until 4pm Sundays).

View Open
Our development in Launton Mews was looking incred

View Open
With the #Jubilee #weekend around the corner we ha